About 12 noon on Friday 9th April, the sad news was announced that Prince Philip had died. The national community of bell-ringers agreed that we should ring a single bell at 12 noon the next day. It was agreed that Leigh should join this national event.
It is traditional to ring the Tenor bell with one strike for each year of life. For Prince Philip, that is difficult to do by chiming the bell. Therefore, we were given the option to raise the bell and ring it in the English way but half muffled, 99 whole pulls (hand-stroke and back-stroke).
Shortly before midday, Helen and I fitted the muffle and raised the Tenor bell. At 12 noon precisely, the ringing started with Helen counting most carefully. Following tradition, I rang slowly, with the last 5 whole pulls slightly slower to indicate his “retirement” years. It took 11 minutes 34 seconds to complete.
We thank Adria for announcing our tribute on the Leigh web site and sending out a news flash – it was just in time for several people to join our tribute by coming to listen. We greatly appreciate their support. We also thank John Squirrell (Reigate bell-ringer) for recording the tribute – he has sent me the last part with his spoken note (2 min file) and confirmed his agreement that we shall send it to the Leigh web site. 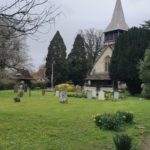